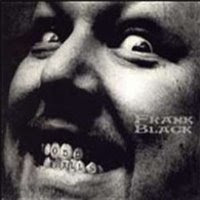 I saw Frank Black and the Catholics at Berbati's Pan in Portland on Saturday, March 4, 2000. This must have been when I bought this CD, though I could have sworn it was at a show at the Crystal Ballroom.* It matters not. The point is, this is a semi-rare CD that was only available at shows and possibly online for a short period of time. In physical form, at least. I think you can still download it.

It's a self-released collection of rarities and b-sides, mostly recorded between 1994-1997. A lot of the tracks are on singles, a few of 'em aren't. So, as a "hardcore" fan, my hands were tied. I'm glad I bought it, because I never saw it again after I swiped it up at the merch table. This is a good collection, but it may be best suited for serious, or as I said, "hardcore" fans. It's a must for any completist, not a good place to start for someone who's never heard the man's music before.

I'm rather forgiving, so I like pretty much everything on here. "Baby, That's Art" is a Cult of Ray-era b-side that could have ended up on the album proper. What a song title. "Everybody Got The Beat" is a 2-minute race through a peppy pop number that borders on punk. I can't understand all the lyrics, but I like the ones I've managed to decipher.

"Jumping Beans," one of the songs on the "Kitchen Tapes" section of The Black Sessions is given proper treatment here, and where it sounded like a whole lot nothin' on that version, it ends up being a really great song once it's all flushed out. "Just A Little" is a sweet cover of an old 60's pop number, one of my favorite covers that FB's ever done. "You Never Heard About Me" is another song that could have been on an album and not seemed like a super weak link, so it fits right in on this collection.

The CD ends with "Man of Steel," a song that first appeared on Songs In the Key of X, a weird soundtrack-ish like thing for the X-Files TV show. It's spacey and about a minute too long, so it's another one that works well here.

I hadn't listened to this one in a while, and now that I'm going back and rehearing it, I'm realizing how much I like a lot of these songs. Of course, it's one of those annoying collections that doesn't include all of his b-sides, but it includes stuff that isn't available elsewhere. One of my pet peeves (on both counts), but I'll go the extra mile for Frank.

*Edit: I now realize that it WAS at a show at the Crystal Ballroom, and it was on May 15, 2001. (Thank you frankblack.net Gigography)

Been rocking this CD in the shower for the last few weeks. Surprisingly strong b-sides for the most part. Heck, any of these would fit in on an album of his. The man was in the zone back then. That cover song is incredibly good. "Jumping Beans" is bizarre, even for him.