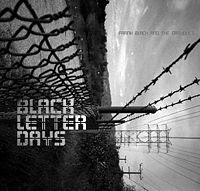 In the summer of 2002, FB and the boys did something that the rock world hadn't seen since...Guns 'N Roses? They released two separate albums on the same day. This one's first alphabetically, so we're running with it.

This record shares a lot with Dog in the Sand, but with a more prevalent acoustic guitar presence, it takes it a step further and ends up being even better. Feldman's still there making sure it all happens, and the rest of the gang just keep getting better and better as a band. This is a fantastic collection of songs, leaning ever closer to what FB was eventually getting to (we'll get there, too), which is his own distinct brand of trad/Americana/roots rock. Even that's not a completely accurate description. Anyway, there's still plenty of rock to be absorbed here. It's a solid mix of styles that never strays too far from what you'd expect from 'em. And the songs are just great. I was obsessed with this record for quite a while.

This album is bookended by two different versions of Tom Waits' "The Black Rider," and they're fine enough, but maybe not as consequential as they were meant to be. The first one's hard and heavy, the second one ends the album on a somewhat playful note. I guess it makes sense. But the real album starts with "California Bound," a terrific song with a terrible name. Right off the bat it's clear that the band has mastered both the recording process (live to two-track again, if that wasn't clear) and feeling the songs out as a unit. If these songs really are live run-throughs, it's really impressive.

"Chip Away Boy" is another one of my favorites, and it follows "California Bound"'s ending racket with a piano intro that sounds very uncharacteristic of the Catholics, but once it gets going it all falls into place, riding a super-strong chorus and plenty of guitars doing plenty of different things. The record takes off from there, picking up momentum and slowing it back down and opportune moments, never falling out of rhythm.

My favorite track on the record is almost smack-dab in the middle. "The Farewell Bend" works off a traditional (not that I really know what I'm talking about, but it sounds familiar) progression played on acoustic guitar that chugs along, constantly feeling like it's building towards something. The drums that you might expect never kick in, but some screeching electric guitar adds a heavy background that provides texture but also a jagged juxtaposition to the emotive and strangely soft vocals. At the risk of overstating it, I'd have to say it's another under-appreciated FB classic.

This CD is 18 tracks, clocks in at over an hour, and it feels like it. In a good way. It's song after song of great melodies and lyrics that, like the music, are starting to feel a bit more traditional and a bit more timeless. It's something to get used to, but I realize now that he really does ease us into it.

"Cold Heart of Stone"
Posted by Wockenfuss at 11:19 PM

oh! i got this one, too! i think because my bro-in-law brad told me to (he also introduced me to the pixies back in '92. i know...i was late). um...i don't know if i've ever listened to this album and now i'm ashamed of myself.