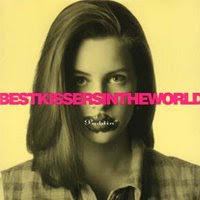 Best Kissers' relationship with Sub Pop was a short one, beginning and ending with that single EP. After hammering out a couple of 7" singles in '92, the major labels came knocking (as they were prone to do if you were from Seattle and holding a guitar at that time) and the boys were poised to hit the big time. Apparently that involved releasing one more EP.

Puddin' is another five-songer, and it comes off as a tad uneven in comparison to their incredibly strong eponymous debut. No matter, it's still a great little collection of songs, and it's certainly more polished than the previous effort. But, Gerald Collier makes sure to throw in a smattering of f-words to make sure that you know they haven't crossed the line; any visible major label sheen wipes clean off in a jiffy.

"Pickin' Flowers For" leads of the album, as it was the single being pushed in conjunction with this release. You can hear why. The song is driving and catchy, careful not to get too repetitive while still featuring a huge chorus. The guitar work is big as well, riding the hooks but also slipping in some squeals to let you know they don't care that much. This track really emphasizes what was great about Collier's songwriting with this band: sure, he loves the ladies, but he's really only willing to go so far. And if you're not on board, he's got other shit to do.

"60 Seconds" is a solid rocker, but it suffers from being sandwiched between the anthemic opener and the indelibly catchy third track, "Melanie." It's songs like this that I can point to as solid proof that this band should have been way bigger than they were. A song like "Melanie" is as good as anything that got any serious radio play back then. It's terribly catchy, guaranteed to be rattlin' around the ol' noggin for hours. And using a specific name is never a bad touch.

Things sort of fizzle at the end, and even though "Smoke Rings" provides some sweet riffage, it's followed by "Laughable," a track that takes some time getting started and then branches out into some slightly mathy breakdowns that, while ambitious, just sound out of place on an album this peppy and short. So, maybe not my favorite song of theirs, but I think that's mostly due to it's inclusion with these other songs.

I'm pissed. I know they did a video for "Pickin' Flowers For" and I can't find it...

Whatever. You can hear that song and "Melanie" here.