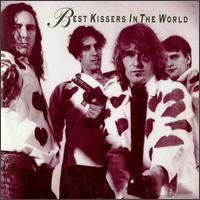 The early 90's really was a great time for discovering new music, especially if you lived in the Northwest. If something had the Sub Pop, C/Z, or eMpTy label on it, you could give it a shot and know that you probably wouldn't end up with too terrible an album. And, with The Rocket covering any and every local band that was worth checking out, there were always random band names that would jump out at you while you were wandering around the record store, names that sounded familiar, but only because you had seen them in print or in ads for upcoming shows.

Best Kissers In The World were a band that I had read about and this, their debut EP, was released on Sub Pop records. It fit two of my staunch criteria and because it was only five songs, it was offered at a reduced price. We had a winner. I remember buying this slipcover CD at Ranch Records in Salem, probably spending the last of what little money I had in my pocket. I had heard good things, and with a band name like that, I could look forward to rattling it off when discussions of cool new music were taking place and looking like a really cool guy. Because really, that's what it was all about.

The fact that the music was fantastic only sweetened the deal for me. I've been listening to this CD for over 15 years now, and I still get a kick out of the songs when they shuffle through on the ol' iPod. Best Kissers, like a lot of other great NW bands, got sucked into the grunge machine when they really weren't about that. Sure, on the surface they were playing loud guitar rock and maybe donning a flannel or two, but scratch that surface and it became clear that this was smart(er) rock. I think part of it was shtick, but they fancied themselves a bit more refined than a lot of their brash and goofy scene mates. The guitars were loud, but the structures were there, lending themselves to additional complexity and ambition in the songwriting. The same can be said for the lyrics, which were smart as shit. In the end, they sounded a lot more like The Replacements than Mudhoney.

I have put all of these songs on any number of mix tapes over the years, and I'm a big fan of all five of 'em. I have to break them down one by one:

"Workin' On Donita" - A great opener, a rowdy love song for (I'm assuming) Donita Sparks from L7. Best lyric: "Yeah, she got it all/ She got a Flying V." Awesome.

"Goldfish Bowl" - I always wondered what this song was about. Like most of their songs, it about a lovely lady, but I never knew what he meant by "Spends her time working in a goldfish bowl." This is a short and peppy one, always sounded like the radio smash to me.

"Slightly Used" - My favorite song on the CD, and one of my favorite songs in general. The opening lines just kill me every time, and I've never known why: "I got all of your postcards side by side/ Next to Frampton Comes Alive" That really is just an incredible lyric. It's a strange song, not really having a set verse and chorus, but it just works so fucking well.

"Vicodine" - Yeah, that's how they spell it. I've never been able to tell if it's a drug metaphor for a chick, or if he just digs pills. Either way, it's a darker track, but a great one nonetheless. Part of the chorus: "Vicodine hold me in your arms/ Whip me into shape today." Good stuff.

"Hungover Together" - A mixtape classic. The Supersuckers covered it some years later, but the original has always been the purest form, a smoky duet that should have been a NW anthem.

This CD is really hard to find, but if you ever do, snatch it up. You shan't be sorry.

Couple tracks from this EP here.

I used to love that little CD. I actually named my high school girlfriend's cat Vicodine after that song. I thought it was a love song about a girl. Her parents realized what it meant a few years later and they changed the cat's name to Vicki. Hilarious. Oh, and the cat ended up being retarded.