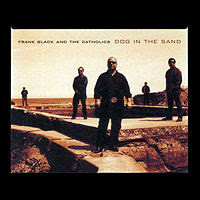 Eric Drew Feldman returns. And what a difference it makes.

They're still rocking the live to two-track recording method, but by this time they've got it down to a science, and with Feldman adding keys to the songs (plus the addition of pedal steel and some extra percussion), this record has much more depth and feel than the previous two. Joey Santiago even comes back, adding some strong guitar to the opening track, "Blast Off," which at over seven minutes seems a little gutsy, but FB's got nothing to prove at this point.

This album has always struck me as darker and more serious than the stuff that preceded it, but it might be because of the cover, which is a welcome change after the bizarre artwork that adorned the first two Catholics records. The songs are at least more involved, and with the aid of the new instrumentation, they come across as more rehearsed and less jammy. I like it, because I think it combines the best parts of the studio records with the best parts of the rawer two-track stuff.

The pedal steel really signifies a shift in FB's songwriting style. It dominates tracks like "Bullet," which is one of his most decidedly twangy songs up to this point. I never would have thought I'd be on board with it, but it's a great song. Frank lets the vocals hang all the way out, and the standard guitar screeches, offsetting the clean lines of the pedal steel.

While that one gets a little worked up, there's a good number of songs here that bring it down quite a bit. "Stupid Me" is poppy but fairly lite, and "The Swimmer" is another one that works the pedal steel into the forefront and keeps it slow but steady. "I'll Be Blue" does the same thing, riding the minor chords and finding FB proving that he can still get lilting with the melodies when he wants to. Conversely, he can still yelp, as he makes clear on the clamoring "Hermaphroditos," and then again on one of the album's best tracks, "If It Takes All Night."

The album proper wraps up with the title track, another country-ish slow-paced number that's a nice enough one to end on. It's followed (at least on the copy I have) with four acoustic demos of amended versions of songs from the album. They're recorded well and were definitely worth including. But that's coming from me, and I have a huge boner for bonus tracks.

Frank Black is always shifting directions (like any good songwriter, I suppose), and this is a solid record that certainly showed the first signs of how his sound was going to take shape in the coming years. Think it might have been a deal breaker for some people. I was in too deep already. In for the long haul.