Frank Black - The Black Sessions Live In Paris Plus The Kitchen Tapes (2xLP, 1995) 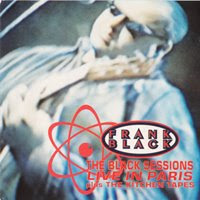 Is that title long enough for you? I wish I could remember where I got this record. I don't think it was from eBay, I feel like I lucked out and found it in a shop somewhere. It doesn't really matter.

What we've got here is a live recording of Frank Black and his early backing band (Lyle Workman, Eric Drew Feldman, and Nick Vincent) on the Teenager of the Year tour. They did a French radio show called Les Black Sessions, and apparently decided to release the recording. This isn't a bootleg, though it does kind of look like one. But FB does liner notes on the back, and it's got the 4AD logo is on there as well. And it sounds much better than your run-of-the-mill mid-90's bootleg.

This is a great record, a great recording, a great show. Frank plays a fair amount of songs from each of his first two records and a handful of random tracks. Eric Drew Feldman plays on this, but he's doing bass duties, so any keyboards that were included on the original recordings aren't on the songs here. It's pretty sweet. They open with "Two Spaces," a track that rides the keys hard on the album version, but instead it just rides a guitar riff here. It's strange to get used to at first, but once you accept the sort of raw feel of all of it (the live setting helps), it's really an enjoyable album.

Apparently this is the UK version, as FB mentions in the liner notes that the label (Anoise Annoys) asked him to include something special for the "UK release." That's where The Kitchen Tapes come in. It's a hissy recording of Joey Santiago and Frank jamming out a couple songs, "Jumping Beans" and "Modern Age." It's low quality, but it's a fun way to take up space on the fourth side of the LP.

As I've said, I was obsessed with Teenager of the Year in 1994, and have always been bummed that I didn't get to see FB on that tour. I never saw an ad, never heard a thing. Checking this extensive database, I finally can confirm what I had always hoped was true: they just never came to Oregon. So, this record will have to suffice as the next best thing.

Here's Frank playing "Whatever Happened to Pong?" solo about a week before this record was recorded. Not the version included on this LP, but great nonetheless.
Posted by Wockenfuss at 11:19 PM